You Need a Dramaturg (Because Clowns are Creepy, and Other Semiotic Shifts)

I should be sorrier for this than I am.

Like everyone (right?) I have a running joke with a friend about how scary and creepy clowns are. It’s just a joke– considering I sleep every night with a Dell’Arte-trained actor, it’s obviously not an indictment of physical theatre professionals, for whom I have enormous respect. It’s not even related to physical theatre at all– it’s about the imagery. The idea that clowns in full makeup are creepy is now a pervasive cultural trope that everyone recognizes, whether they personally agree or not. It’s now more present in our culture than any other trope about clowns. Yet this was not always the case. I’m not interested in getting into why or how this happened (I’m sure someone’s writing a dissertation about this very subject). The point is that it HAS. And that this kind of cultural shift happens ALL THE TIME.

My husband at Dell’Arte International, performing with a fellow student.

So my friend recently sent me this 2008 BBC article about the University of Sheffield study that surveyed 250 children between the ages of 4 and 16, and found that clowns were “widely disliked,” prompting researchers to urge children’s hospitals to consult with (shocking) ACTUAL CHILDREN before decorating their hospitals. The article goes on to quote a child psychologist:

Patricia Doorbar is a child psychologist in North Wales who has carried out research into children’s views on healthcare and art therapy.

She said: “Very few children like clowns. They are unfamiliar and come from a different era. They don’t look funny, they just look odd. (emphasis mine)

“They are unfamiliar and come from a different era.” OK, she knows clowns do indeed exist in this era. The ACTUAL point she’s making is that the semiotics of the clown– what that imagery means within the context of our culture– has changed dramatically from previous generations to today. In my father’s generation, children’s shows featuring clowns and clown toys were much more common. The trope about the scary clown existed (this Smithsonian article blames it on Grimaldi via Dickens and Deburau via . . . um, child murder), but was far less prominent in popular culture. In two generations, the meaning of that imagery in context changed enormously. When someone creates a clown character in popular culture today, it’s more likely to be something creepy than something lighthearted and fun, because that semiotic has shifted. Clowning for children still exists in popular culture, of course, just usually out of traditional makeup. A picture of a clown on the wall of a hospital, once (evidently) a comforting sight to most children, is now a frightening sight to most children. The “creepy clown” has supplanted the “happy, funny clown” as the primary trope about clowns in full makeup in our culture, and it happened fast. Lights up on a clown in full gear 50 years ago would generate a different audience reaction, and create a different set of expectations, than lights up on a clown in full gear today. 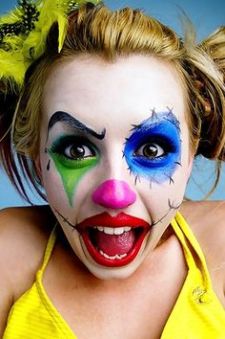 Seriously, what do you think is going to happen next? Balloon animals or murder? From “Top 5 Clown Makeup Ideas” on designsnext.com

And so it goes with imagery, tropes, characters, and narratives throughout the entire history of dramatic lit. When we stage classic plays, we’re looking at material that comes from a world that no longer exists– a world full of symbols and tropes that have shifted meaning. For example, Taming of the Shrew was, in context, taking a bit of a stand. It stood out from the many popular shrew-taming comedies of its day in that it did NOT advocate beating women into submission. It instead advocated isolating them, starving them, gaslighting them, and denying them sleep until they became tractable and obedient. The Christopher Sly framing device demonstrates how well gaslighting works (and it’s inescapably connected that Sly, like Katherine, is in a position of social inferiority and relative powerlessness). You can convince anyone to believe anything as long as you control what they see, hear, and, ultimately, think. While Petruchio’s techniques are horrifying to us today (you can see them all codified in Biderman’s Chart of Coercion, a tool used by Amnesty International and domestic violence organizations to help people define and understand abuse), they were a gentler approach in the context of the time. Check out the scold’s bridle if you’ve never heard of it.

The idea that a woman who isn’t obedient and who speaks her mind is a “shrew” who needs “taming,” while not fully banished from our culture, is no longer mainstream. Petruchio’s techniques are now considered abusive. But understanding the historical context of the play provides a window into the playwright’s intent and opens the possibility of a recuperative staging that preserves that intent. And while Shrew may be an extreme and controversial example that some feel is unrecuperable (I’m honestly not even certain where I land on that myself, although there’s a local production about to open with an amazing team that I’m dying to see– if anyone can do it, it’s these badasses), the point stands. A dramaturg can help you navigate the wily waters of narrative and text in historical context if that’s something you’re not already doing yourself. And even if it is, a dramaturg might have access to resources or knowledge that you don’t possess, bringing in points of view or historical context you didn’t even know to look for.

Theatremakers are divided into three categories: Those who have no idea what a dramaturg does, those who think dramaturgs are for new plays, and dramaturgs. OK, that’s a joke. But I see people approaching classic work all the time with misguided points of view. Either they’re beating the playwright’s intent to death on the rocks of fussy (and ultimately egotistical) purism, or they’re making changes in the name of modernization that don’t make sense in the context of the work, that obfuscate rather than illuminate the work. If you’re not into historical linguistics or history, and/or if you don’t have a clear understanding of the culture and semiotics of your audience, get a dramaturg. Work with her before the first rehearsal. Let her help you conceptualize the work in a way that will preserve the writer’s intent, which means the engine of the play– what makes it kick ass, what makes it endure, what makes it work for audiences for decades or even centuries– remains intact and clearly presented for a 21st century audience. And that’s IMPOSSIBLE to do by just “doing the play” without thought to the distance between the play’s original cultural context and current one. Insisting on a purist interpretation is essentially insisting on changing the meaning of the play. The older a play is, the more this is true.

Vivien Leigh and Marlon Brando in the film version of A Streetcar Named Desire.

Even in plays that are much closer in time to us– Miller, Williams, O’Neill– there are symbols and tropes that either have completely lost their meaning, or whose meaning has shifted. For example, a man enters a living room where his sister-in-law is standing. The man removes his outer button-down shirt and is now just wearing a T-shirt. In 2014, that symbology would likely go completely unnoticed– a T-shirt has become perfectly acceptable public attire. Even an A-line undershirt is acceptable public attire. It’s no longer inappropriate for a man to take off an outer shirt and wear a T-shirt in his own living room in front of his sister-in-law. The original semiotic attached to that moment has been lost. If you want to preserve the intent– a man doing something that most people in the audience would consider inappropriately intimate– you need to do it another way, such as create that feeling through the acting. And if you don’t understand the historical context, the playwright’s intent for that moment is completely lost on you, or you may misread it as something else entirely. If you’re not well-versed in the history– and that’s no shame, plenty of great directors aren’t– a dramaturg will help you find and work with moments like these.

Conversely, a working knowledge of contemporary (and local– geography can change everything) symbology, popular culture, and slang can be crucial to speaking successfully to your audience. Terms change meaning, and the new usage may be obscure. You may think a line or a word means one thing to your audience when it really means another. I once saw a local director post on facebook that the community here is far too supportive and uncritical, so much so that people refer to it as the “Yay Area.” Or take, for example, the way words such as “mod” and “ratchet” have taken on new meanings. Think for a moment: There will be people in your audience who have never heard either term used ANY OTHER WAY. Sure, older people will think first of the Kinks and socket wrenches– but that’s my point. Understanding how meanings change in different contexts is important, and if that’s not your jam, then find a dramaturg, because I assure you, it’s hers.

I’m barely covering the beginning of what a dramaturg can do. A dramaturg is your in-house expert in research, narrative, semiotics, and history. Consider working with one! Wondering where to find a dramaturg in your area? I bet the fine folks at LMDA can help you.

By Jon Wolter, from keepingwolteraccountable.tumblr.com

6 thoughts on “You Need a Dramaturg (Because Clowns are Creepy, and Other Semiotic Shifts)”