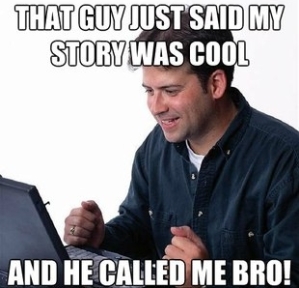 Playwriting is storytelling. The primary function of a play is to tell a story. It doesn’t have to be a linear narrative, or have realistic characters, or be traditionally structured in any way. But the basic human need to tell, share, hear, and create stories is as old as the human brain itself, and theatre is one of our oldest storytelling tools.

A play’s most basic elements are the story and the characters within that story. I encounter so many clunky, unsuccessful plays that focus on something other than one or both of those.

Plays about “issues” are probably the most prevalent. You have an opinion about something– abortion, the environment, religion. You write a play wherein the central events are all arguments about these things. This is not interesting. For one, we can all have arguments like these on facebook every day. We don’t need to stage or see a play in order to have The Argument Experience. Secondly, argument is not conflict. A play that consists largely of people shouting their opinions at one another is not a story about competing objectives. And while you might want to be the kind of person who thinks conflict isn’t central to dramatic narrative, I do not. I agree that conflict doesn’t have to be violent, or linear, or even interpersonal, but dramatic narrative is created by conflict of some kind– an important choice to be made, competing objectives, a task made difficult, a journey through something challenging.

“The Mullet: My Journey, My Struggle,” a solo performance by John Stamos

Another unsuccessful “issue” play is one that’s predictable. These plays set up a weak, obviously assholic opposition and then eviscerates that opposition with the Magical Truth and Awesomeness of the playwright’s opinion on the issue. A victory over an obviously weak-ass antagonist, argument, or idea is not an exciting victory. Would you rather watch a game that came down to the final three seconds, or would you rather watch a 67-2 rout? If you want to tell the kind of story where one side triumphs over another side, the stronger you make the “losing” side, the more compelling the narrative will be and the more satisfying the conclusion.

Remember when you were an undergrad and you thought plays that insulted, offended, and discomfited the audience were hella cool? Because: EDGY. Now that I’m an adult who relies on the goodwill of my audience and ticket sales, I no longer have a bone to pick with my audience, or with “audiences” as a concept. I don’t see myself in an adversarial relationship with “audience” at all. But my company will still do plays that are extremely boundary-crossing, that often some audience members find uncomfortable or challenging in some way. The difference between a play to which we’ll commit time and money and one we will not is simple: while watching a well-written play that crosses boundaries, audience members who are uncomfortable feel that way because of a relationship they have to the material– to the events or the characters– that comes organically out of the story. That’s a culturally valuable challenge. But when I read a play that’s just randomly insulting or (attempting to be) shocking without any purpose other than to be randomly insulting or shocking, I set it aside. It’s all one big juvenile yawn unless it comes organically out of story. A toddler can rip up a bible and then pee into the shreds, it’s the job of high school sophomores to make semen jokes during lunch, and the internet is paved with hurled insults and “offensive” material. You have to give me something more than that– and the “more” is the kind of context that comes with compelling narrative. If your goal is to “offend,” just make another offensive tumblr. The most offensive aspect of that kind of theatre is charging $30 for something we can get by the wagonload for free online.

Another area where playwrights often lose sight of storytelling is character relationship. Often a playwright will want to draw two people from different backgrounds together, and, instead of taking the time to do this with story, will use a superficial means that only ends up feeling forced. I see this all the time with smoking, pot, and alcohol– like the very fact that someone does one of these has the power to make you take a second look, reframe your opinion of them, and let them into your heart? Hasn’t every human alive done one or more of these things at one time? I’m not inviting John Boehner up to my hotel room just because we’re both drinking scotch. The second most popular approach is the shared superficial like– some song, musician, movie, brand of something, book. “What? You like Spaghetti-Os too? I previously hated you, but now LET’S FALL IN LOVE.” It never rings true. Sure, it’s enjoyable when you discover that someone likes the same underappreciated musician you do, and just as enjoyable to see a moment of connection between characters, but it’s not enough to act as the turning point of an entire relationship.

Not enough beer in the world, Spleen.

Often playwrights will start a play with ten or fifteen pages of throat-clearing– meaningless dialogue that theoretically “introduces” characters and lays down exposition while actually, the play loses nothing and gains real momentum by skipping those pages entirely and diving directly into the narrative. If the first ten pages of your play are characters saying “Remember when [blah]?” “Remember how [a thing]?” “Remember the time [something]?” you should probably take a second look. I don’t know these people. Their reminiscences are of limited interest to me until I have a context within which to put them. Work that exposition into the narrative itself. Does your play start like this? “CRYSTAL: Remember when Mother died four seasons ago, during the worst alfalfa harvest in Cowcatcher County history, right after Father tried to sell the farm to the mysterious Dr. Ballsworth? And remember how we laughed when we discovered that in her will she had left the entire Farthill Valley to you and I? And remember how she used to say ‘A penny saved is a penny that could have been spent on vodka?'” Yeah, you can cut all that.

Or you could just do this.

I recently read a play whose intricate relationships are painstakingly revealed, bit by bit, in a lovingly tended non-linear narrative, until a gut-punch of a fucking gorgeous payoff at the end, and I almost sprained my fingers on the keyboard in a rush to ask for the rights. What is the play “about”? What love means? Sacrifice? I’m still mulling that one over. Is every detail of the exposition laid down? Newp. But the play is so painfully, heartbreakingly, beautifully rendered that the characters and their story has been haunting me ever since. Why did she make that decision? Does she regret it? Was it worth it? What will happen to her after she’s made that final choice? I can’t get these characters out of my head. And *that’s* the impact you want to have on your audience.

3 thoughts on “Playwriting is Storytelling”