Rashida Tlaib Shouldn’t Apologize. You Should for Your Sexist Double Standard. 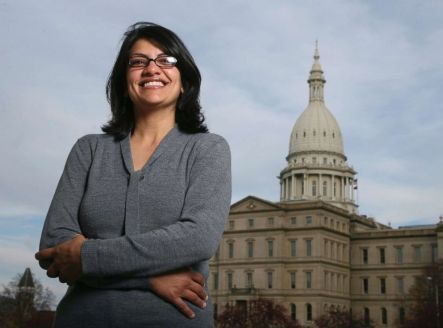 Oh, the horror! Newly sworn-in Congressional Representative Rashida Tlaib (D-MI) attended a MoveOn event last Thursday evening during which she used some colorful language to refer to former reality TV personality and Russian mob-linked “real estate developer” Donald J. Trump. She stated that the new Democratic majority in the House was going to “impeach the motherfucker.”

Interestingly, few on either side of the aisle are complaining about the substance of Tlaib’s statement. Even Republicans are beginning to recognize that a line has been crossed when your POTUS, whose understanding of foreign affairs is limited to which foreign leader has the hottest wife and which nation’s bribes– sorry, “Trump Hotel bills“– are the largest, spouts obscure Kremlin propaganda on live television. No, what people are upset about is her use of the word “motherfucker.”

While Tlaib is surely not the first person to refer to Trump in such a way, this event is being treated as if it’s a National Scandal. If you ever needed an example of the sexist double standard in American politics, here it is.

Tlaib’s comment has launched 1000 hot takes about how “dangerous” or “divisive” her single f-bomb was, but when men use the same kind of language, they’re consistently portrayed as lovable scamps, “tough talkers,” or “real.”

In Beto O’Rourke’s concession speech last November, he said of his campaign team, “I’m so fucking proud of you guys,” and everyone found it charming– so charming, in fact,  someone is selling several T-shirt designs emblazoned with the quote. And don’t come at me with their different contexts; Tlaib is being slammed for her language, not for her sentiment, while Beto remains the Great White Hope of the Left.

Joe Biden’s profanity is considered charming earthiness, part of a roguish public persona that has served as the inspiration for hundreds of memes.

And in case you’re wondering whether race is playing a role here, I give you Kirsten Gillibrand’s use of “fuck” at NYU, June 2017.

Again, this is just the tip of the iceberg. Swearing is nothing new in American public life, yet when it’s done by a woman of color, suddenly it’s an unforgivable sin for which she should immediately apologize.

In many of the preposterous hot takes written from the Hypocrisy Fainting Couch, Tlaib is chastised for being “divisive” and for failing to understand that her profanity doesn’t “build bridges” to bipartisanship, as if all Mitch McConnell needs to repent his evil ways and lead his party to oust the Russian asset in the White House is a kind word and a smile.

Over and over, both in these op-eds and social media, I’ve seen people bloviating that Tlaib should apologize because “we expect more from women,” “women should adhere to a higher standard,” “we shouldn’t sink to their level.” What this means is that we have one standard for white men, wherein their profanity is winkingly categorized under “boys will be boys,” and another for everyone else, an impossibly high standard set up to ensure our failure before we even begin.

Tlaib’s moment of profanity isn’t nearly as destructive as the endless purity tests for women in politics.  Is she “likeable”? Pretty enough? Nice enough? Not shrill? Not too loud and demanding, but loud and demanding enough in a non-threatening way? Does she fight hard, but only about certain issues, not about, say, sexism? Is she thin enough? Does she dress well, but not too well? Does she defer to the men or does she treat them the way they treat her?

Has she ever made any mistake ever? Then she’s “unelectable” due to her “baggage,” a label we will cement to her name through dozens of articles “asking the question,” a stance that gives us plausible deniability even as we give the idea weight and importance.

When men make precisely the same mistakes, they’re forgiven, immediately, applauded for their half-assed “I apologize if I offended anyone,” if the incident is even given that much attention. In a nation where a child molester, a judge who protected a child rapist, an open white supremacist, an “acting Attorney General” who defrauded veterans and threatened those who complained, and an entire rogue’s gallery of grifters and grafters have all garnered the approval of Republicans at the highest levels of government, a woman of color is criticized by people on both the right and the left for uttering a single swear word in the fight for justice against that very criminality.

The problem we have is not that Tlaib said a naughty word. The problem is that our systemic sexism and racism holds women, especially women of color, to an impossibly high standard, and uses their failure to meet that impossible standard as evidence that they are unfit for power. “It’s not that she’s a woman,” the lie goes, “it’s that she did this thing”– “this thing” being something for which men are routinely forgiven– or even congratulated. The left laughs at Trump for saying Tlaib “dishonored” the country moments after using the same language himself, but our own hypocrisy is no better.

Tlaib herself, to her credit, is not apologizing, and has made an iron-clad case for impeachment in an op-ed for the Detroit Free Press. I strongly recommend reading the whole thing, but I will leave you with this quote: