I’m old enough to remember Frito Bandito. I was a preschooler but I remember it well. He was a racist stereotype– a Mexican “bandito” character always trying to steal Fritos. When the National Mexican-American Anti-Defamation Committee complained about the racism, the Frito-Lay Company (then, as now, owned by PepsiCo) first tried (obviously unsuccesfully) to tone down the racism, then, when complaints continued, retired the character completely. The entire lifespan of the character was just four years, ending in 1971. When told by Latinxs that the character was racist, Frito-Lay responded by retiring the character.

That was 47 years ago. Today, in 2018, a young white man named TJ Davis is performing a character he has named “Juanito Bandito,” and his response to being told by Latinx people that the character is racist? Telling them they’re wrong.

The blond-haired, blue-eyed Davis writes and performs the Juanito Bandito musical comedies, in which he wears a black wig and a big, stereotypical black mustache, puts on an exaggerated Latinx accent, and performs as a character whose name is so close to “Frito Bandito” it’s impossible not to call it– and the longstanding racist faux-Mexican “bandito” character for which both are named– to mind. The word “bandito” is Spanglish, an Anglicization of the Spanish word “bandido.” “Bandito” specifically refers to a Mexican bandit, a racist stereotype popularized by generations of western films and television shows. 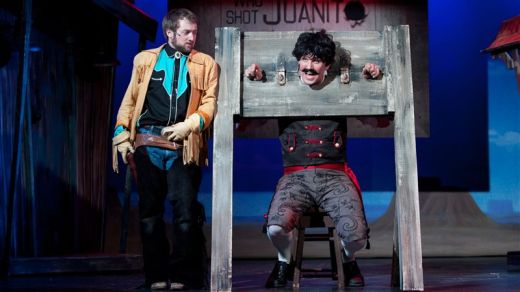 A PR shot from Who Shot Juanito Bandito? (Source: The Utah Standard-Examiner)

A Latinx theatre artist, Jazmyn Arroyo, privately contacted Davis to express concerns about the racism inherent in such a performance. Instead of responding to her privately, Davis published her email without consent on his blog and made an embarrassing attempt to excuse his character with every timeworn argument you’ve all seen a million times from white people called out for racism. When that post received exactly the reception you would imagine, Davis took it down and replaced it with the huffy insistence that “Juanito Bandito” is “Spanish (from Spain)” and adds the contradictory claim that “JB is not a stereotype of any race or culture.”

Davis’s entire 940-word original response, as well as the shorter replacement, all boil down to “You’re wrong. It’s not racist,” which is an incredibly common response from white people confronted with their own racism. In his initial blog post, Davis hits every common trope of white fragility, from the old classic, “You’re just taking this wrong way” to new favorites like “Racism exists and is terrible, but this is totally not racism.” He works in some whitesplaining, claiming that the accent isn’t racist (“There’s something about hearing familiar words or phrases spoken in a different, not grammatically correct manner that really tickles our funny bone”) and trying to show the difference– to a theatre professional, mind you– between “stereotype” and “character”:

The Bandito productions have nothing to do with race or nationalities.  An intelligent person who has attended any of the shows would agree that Bandito does not “get laughs by perpetuating negative stereotypes.”  Bandito is not a stereotype.  He’s a character.  One that I identify with quite deeply.  He’s serious, he’s silly, he’s mean, he’s kind, he’s arrogant, he’s self-conscious, he sings, he dances, … he even raps!  He’s not a stereotype of ANY race or nationality.

Of course, he also includes the familiar “I have Latinx friends and they’ve never complained.”

The point here is that he’s exhibiting racism while trying to prove he’s not racist. A Latinx person tells him that his portrayal of Latinx people is hurtful to Latinx people, and his response is, “You’re wrong.” Davis is claiming he knows better than Latinxs do what does and does not hurt them. That level of paternalism is only possible if you truly believe you are in some way superior– smarter, more insightful, more knowledgeable. When a child fears a haircut will hurt, as adults we feel comfortable telling them it will not. When a Latinx adult tells you something hurts, what makes you feel comfortable telling them it does not?

Despite his protestations, it’s hard to imagine that Davis, in the ten years he’s been playing this character, has been so far removed from his own American culture that he has no idea what “bandito” refers to, particularly considering that he often bills Juanito Bandito as an “outlaw” and an “infamous villain.” It’s hard to imagine anyone living to adulthood in the United States without being aware of the racism inherent in the “bandito” stereotype. It’s hard to imagine any adult believing that just saying “Spanish (from Spain)” can eliminate the meaning of the word “bandito” or the generations of racist mockery of Latinx people through exaggerated accents and fake mustaches.

It’s hard to imagine because the racism in Davis’ shows does not stop at the Juanito Bandito character.

Take a look at this poster for Davis’ 2015 show, Juanito Bandito in the One with the Monkey. Look carefully at the “monkey” character on the right. Look at the wig the white actor playing “Chester the Monkey” is wearing. 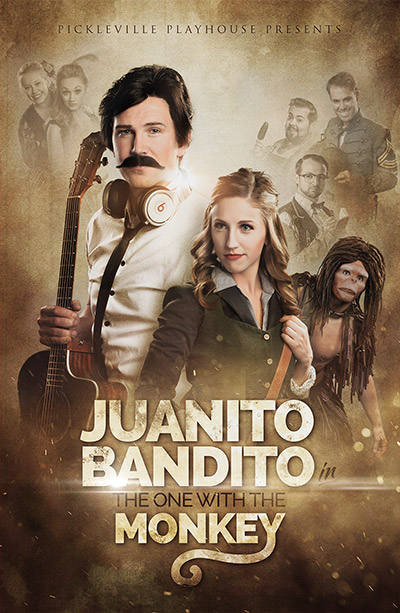 If you would like to see more of this character and the very human Black braids he’s wearing, he’s featured in this promo video for the show. Here’s a synopsis of the show from a review by the Utah Theatre Bloggers Association:

The story focuses on Juanito’s desire to transition from a Western gunslinger to a high-profile rapper. Unfortunately, he realizes that most rappers have already made the change from criminal to musical artist, so instead of falling into the ever-growing sea of non-originality, Juanito decides he needs a shtick. So, naturally, he finds a dancing monkey.

I don’t doubt that TJ Davis considers himself a good guy, and thinks he’s not racist. He did his LDS mission in Guatemala and no doubt met people there he still considers friends. But nothing changes the fact that these shows are racist.

TJ Davis, you have every right to write and perform racist shows. Racist speech is still protected by the First Amendment. But own the racism. Don’t tell Latinx people they’re wrong about what Latinx people find hurtful. Tell them the truth: You’re making money so you don’t care if the cash cow is racist.

But if you do care– if you don’t want to perform racism– then don’t perform racism.  You could retire Juanito Bandito and let him rest in obscurity with his near-namesake, Frito Bandito. You already have a following and a venue; you could write a new show without any racist characters in it and a new starring role for yourself. But whatever you do, please start listening to people of color. It is difficult and frightening to speak out about racism because the response is so often like yours– rejecting, arrogant, condescending, oblivious. White supremacy is fighting hard against diversity and equity in America right now. People are suffering and dying over these issues. The very least you can do is listen.