The Response to “Pussygate” Oozes Hypocrisy

After every horrific thing Trump has said and done– insulting Mexicans, Muslims, the disabled, a Gold Star family, the poor, journalists, women– suddenly his 2005 off-camera boast, caught by a hot mic, that he’s able to sexually assault women (“grab them by the pussy,” and “get away with it” because he’s “a star”) has his supporters among the GOP fleeing like rats leaving a sinking ship.

After every horrible thing he’s said and done, why is this suddenly the line that loses him almost all his support? It’s not like he hasn’t insulted women in the past. He’s openly attacked individual women throughout the campaign– Megyn Kelly, Alicia Machado, Elizabeth Warren, Ruth Bader Ginsberg, Katie Couric, Angela Merkel, Carly Fiorina, Heidi Cruz, Meghan McCain, Ana Navarro, Bette Midler, and Cher, just to name a few. He has publicly speculated about dating his own daughter. When it comes to women, he’s never made it a secret that he’s a monster.

His outrageous racism, sexism, xenophobia, narcissism, startling ignorance, childish bullying, petulant tantrums, open hatred of freedom of the press, and contempt for anyone who doesn’t lavishly praise him have slowly eroded his GOP support, but his boast about sexual assault was the nail in the coffin of his candidacy, losing him the support of the RNC itself and many prominent GOP politicians, many of whom are calling for Trump to step down. What that would mean for the GOP is unclear since voting has already begun– tens of thousands of mail-in ballots have been filed so far.

Various scenarios, each more dubious than the last, have been floated by desperate Republicans in the past 48 hours. Trump could vow to step aside before swearing in and let Pence become POTUS (because what American really needs is a man who thinks women should be legally required to pay for funerals for miscarriages and abortions— now that’s respect for women!). Trump could step aside now and be replaced on some, but not all, ballots if the Supreme Court allows it (unlikely, since the problem is just that the GOP chose an asshole, not that he’s been incapacitated by illness or killed in a plane crash, although I would not put assassination past the RNC at this point.) The election could proceed as planned and the electoral college could just choose to vote for someone else, violating the law in states where the electoral college is legally bound to honor the popular vote, with Republicans speculating they would somehow magically be able to protect these electors from the law through the sheer force of national hatred for Trump. (“No way would they be prosecuted,” they argue, because Republicans have always been so adept at predicting the future.) But that presupposes Clinton won’t have enough electoral votes to win, which is becoming increasingly unlikely. 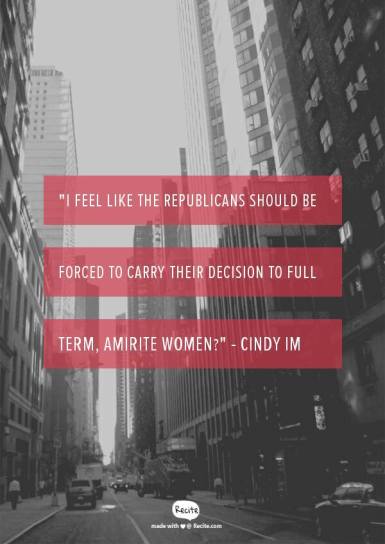 Whether or not Republicans sort out how to rid themselves of the eternally squawking bigoted albatross they fashioned out of stale circus peanuts and bile and hung around their own necks, my point is that Trump viciously attacked women for months in this campaign– entertainers, politicians, private citizens, even foreign leaders– and no one cared. But when he threatened women in the abstract, well, now, that’s a different story.

America has centered a massive amount of its cultural mythology around “protecting women,” especially white women. But we only care about women in the abstract.

We use the “protect our wives and daughters” excuse to get all kinds of laws passed that directly harm real women. We pass laws that are solely designed to restrict access to safe abortions, and to close clinics that provide OBGYN services to women, putting their health (and the health of their babies) at risk. We restrict transwomen from access to women’s restrooms. We have a long history of creating laws to “protect” women in the abstract that restrict and oppress real women.

When Trump finally made an egregious attack on women in the abstract by boasting about sexually assaulting “women” as an abstract concept, politicians and pundits immediately denounced him and distanced themselves from him. When he went after real, living women, the nation collectively shrugged. When he was accused of sexual assault of a minor by a real, living woman, the nation collectively shrugged. When he went after “women” as an abstract concept, we drew the line.

People who drew the line at Trump’s boast about getting away with sexual assault are the very same people– on both sides of the aisle– who  belittle, minimize, and otherwise cast doubt on the testimony of real women who have been sexually assaulted, especially when they have been sexually assaulted by wealthy and powerful celebrities using their wealth, power, and fame as a cover for their actions. Sexual assault victims who speak out are routinely disbelieved and even attacked as “liars.”

We worry about the “promising futures” of young rapists, and give them laughably light sentences, especially if they’re white and/or athletes. Campuses ignore reports of sexual assault, issue slaps on the wrist to violators, or even punish women who report sexual assault. We routinely blame women for their own assaults for wearing the wrong thing, saying the wrong thing, drinking the wrong thing, or being in the wrong place, despite all the evidence we have the shows without question that none of those things matter. We refuse to adequately support processing rape kits.

Yes, what Trump said about his ability to sexually assault women and “get away with it” is horrific– just as horrific as everything else he said when he was still getting the full-throated support of millions of Americans and the GOP establishment. I’m glad many more people are finally understanding– or pretending to understand as the national zeitgeist shifts– why Trump is an execrable human being whose soul is best represented by a grainy image of a pile of rat droppings in a broken cooler half-buried in a toxic waste dump.

Women are people, not symbols of male honor in either protection or conquest. When women speak out about sexual assault, we’re not going off-script in your honor narratives about us for our perverse pleasure. We’re just– and you may want to take a seat for this– telling the truth. The tiny percentage of false sexual assault reports do not change anything. The vast majority of us are telling the truth, yet when we speak out, we are automatically mistrusted, disbelieved, looked at with suspicion. Our stories are minimized and dismissed. Our culture despises sexual assault in the abstract, but we revile the real women who speak openly about being sexually assaulted in real life. They’re disrupting male honor narratives by accusing real men of real crimes. If she’s assaulted, either men failed to protect her or she’s ungratefully rejecting an honorable conquest. There’s no way for men to preserve their honor narratives when real women are sexually assaulted. While men openly despise sexual assault in the abstract, they also openly revile real women who speak out about real sexual abuse. Even in the face of incontrovertible proof, they will find ways to blame the victim. If she’s a woman of color, the blame is intensified sevenfold.

So excuse me if I roll my eyes at all the Republican men clutching their pearls this weekend about Trump’s statements.

Men, especially you Republican men suddenly jumping off the SS Trump Is Human Garbage as it burns and sinks into the briny deep: The next time a woman speaks out about sexual abuse, especially if the abuser is wealthy, powerful, and/or famous, remember how publicly outraged you were about Trump’s comments. And remember that we will spare no mercy in decrying your hypocrisy when your first response to a real victim is to doubt and mistrust her. Do not think we will forget that you’re only interested in protecting women in the abstract. 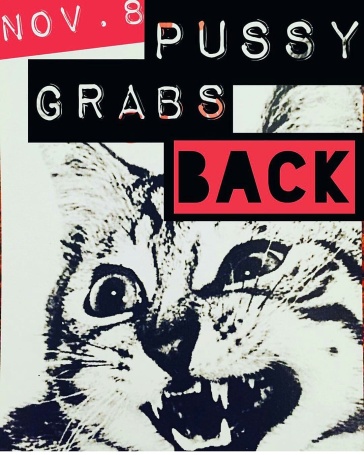 6 thoughts on “The Response to “Pussygate” Oozes Hypocrisy”