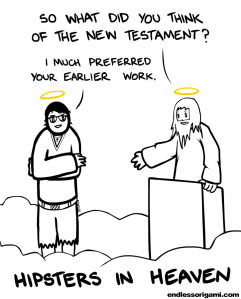 Once upon a time I worked at a theatre that received two cease-and-desist orders in two seasons– one for copying dialogue from a Disney film word-for-word and performing it without permission, and one for rewriting the lyrics to Godspell. The artistic director of the company told me, “The New Testament is so boring! Stephen Schwartz would have LOVED what we did with it if he had seen it. Ours was SO MUCH BETTER.” She then proceeded to tell me that she had learned her lesson, and asked me to write a commission contract for a playwright that would give her “total artistic control” over what the playwright wrote. “It’s my idea to adapt [name of book she didn’t write nor for which she possessed the adaptation rights] into a musical, so I own it.” Instead of writing her contract, I quit.

Around this same time, Boxcar Theatre in San Francisco took an unrepentant stance regarding their contract violations and theft of material from Rocky Horror Picture Show in their production of Little Shop of Horrors. This added fuel to the fire of the longstanding national debate over what directors and producers can and cannot do with a playwright’s work, as opposed to what some believe they SHOULD be able to do with a playwright’s work.

These two things happened almost back-to-back, and I began to think long and hard about the relationships directors and producers have with playwrights. 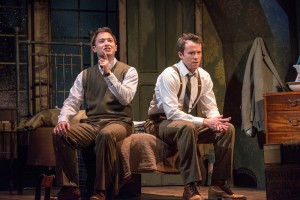 A PR shot for Asolo Rep’s Philadelphia, Here I Come from the press section of their website. No photographer credit was provided.

The latest controversy belongs to Asolo Rep in Sarasota, Florida. Director Frank Galati staged Brian Friel’s Philadelphia, Here I Come with enormous restructuring, eliminating characters and cutting pages of dialogue, all in direct violation of contract. What’s more, it appears from the article I link to above that Asolo Rep makes a practice of this:

The theater has experimented with new approaches to older plays with some success in the past. Two years ago, for example, the theater played around with Leah Napolin’s play “Yentl,” keeping most of the script but adding in original songs by composer Jill Sobule, performed by actors doubling as musicians on stage.

While the Yentl production differed because Napolin had a “heads-up,” and therefore had the opportunity from the start of the process to investigate and hold Asolo to the terms of their contract, the attitude is still evident. Involving a playwright in an adaptation of HER OWN WORK is something that would “kill the creative process” and drag the rehearsal period out to a “two-year process.” The playwright is seen as a hindrance; an unwelcome interloper in the director’s much more important “creative process.”

Friel wasn’t even given a “heads-up,” and one has to wonder if that had to do with a (well-founded) suspicion that he would have told them no. Many who have discussed this controversy have mentioned how surprised they were that a director as well-known and experienced as Galati would have willfully violated contract, but I’m not surprised at all. My guess (and it’s just a guess, as I don’t know Galati personally) is that either the producers told him he had permission, or he felt entitled to do precisely what he did.

I’m basing this latter guess on the vehement arguments of directors all over the country who are at this very moment taking to the internet to express these very thoughts. There’s an entire subset of directors and producers who see the playwright as a necessary evil; a hindrance to their more important creative process, and who see the contract as something that exists more as a formality between the producer and the playwright than a legally-binding document that applies to their work. Here’s what they say.

1. Playwrights should be open to collaboration, and participate in their work’s speedy irrelevancy by refusing to allow directors to change things. This is an argument I’ve heard repeatedly. In my many years of experience of working with playwrights, I’ve found them to be very open to collaboration. They are, however, much less open to willful contract violations. There’s an enormous difference between contacting a playwright with, “I have an idea . . .” and “Surprise! We violated the contract! If you don’t like it and agree to let us continue, you’re a jerk who refuses to collaborate and hates artistic freedom.”

I’d like to point out that this isn’t a discussion about whether or not we should have copyright law, or what should be changed about it. That’s an entirely different topic. This is a discussion from within existing law. If you don’t like the law, work to change it, but as it stands now, we are all bound by it.

I’m very aggressive when I direct Shakespeare, because I can be. But when I directed Cameron McNary’s Of Dice and Men, I texted him when I wanted to cut a single line. He said no. I pushed for it– and lost. That line stayed in the final production because it’s not my right– legal, ethical, or artistic– to produce work with Cameron’s name on it that I doctored without his approval.

Jonathon Brooks as Jason in Impact’s production of “Of Dice and Men.”

The prevailing attitude directors and producers who violate contract to doctor work express is that they SHOULD be able to have that right, that they DO have that right as artists, that their doctoring makes the work BETTER, and that playwrights who do not approve are SPOILSPORTS who do not know what is best for their art.

Similarly, if your interpretation of Angels in America includes cutting five pages of dialogue and adding a scene from Titanic, and you have not obtained permission from both Tony Kushner and James Cameron, that interpretation needs to be adjusted to the confines of the given circumstances within which you’re directing that play: the terms of your contract and copyright law.

Even mediocre directors CAN and DO successfully work around various aspects of their interpretations hitting the cutting room floor almost every day. They do this willingly because they respect the reality of space contraints, budgetary constraints, and the like. What I don’t understand is why the reality of contractual restraints are so poorly respected so much of the time.

It all boils down to this: Respect the terms of the contracts you sign. Respect the enormous amount of work the playwright put into the play before you ever clapped eyes on it. Stop thinking of playwrights as unwelcome interlopers who are there to vandalize your work. You’re interpreting THEIR work. If your changes to their work violate the terms of your contract, you’re the one who’s doing the vandalizing.

If you don’t want to work with playwrights and you don’t want to honor the terms of the contracts you (or your producers) sign with them, you should not be producing or directing the work of living playwrights. There are plenty of works in the public domain from which to choose.