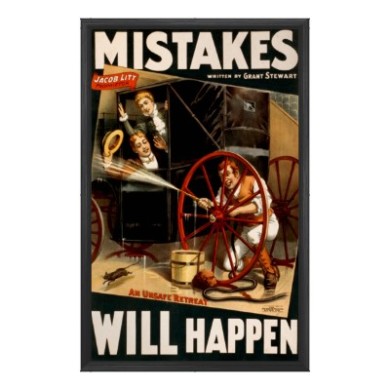 Well, the first day of the annual Theatre Bay Area General Auditions is under our belts, and I’m seeing too many actors sabotage what would otherwise be an excellent audition with easily avoided mistakes. Here’s what NOT to do at TBAs (or at any audition). Strap in.

1. RUSHING. I would *much* rather you get cut off than have you rush through your pieces trying to play Beat the Clock. When you rush your pieces, your shaping, diction, and choices go straight to hell, and all I’m left with is the knowledge that you can say a lot of words very quickly. Your punchlines do not land. Your beautifully crafted emotional moments speed by and make as much impression as a poem written on the side of a runaway freight train. Cut your pieces down to manageable sizes and rehearse them TIMED.

2. BLAND CHOICES. I get that you don’t want to be pigeonholed into one particular “type” and miss opportunities to be called in for other types of roles, but speaking emphatically is not acting. I’ve seen dozens of monologues where the actors made choices I thought were misguided or downright awful, but at least I could see that they were able to make bold choices. That skill is worth a callback. I’d rather have you swing the bat and miss than never pick up the bat at all.

3. SINGING WHEN YOU CAN’T SING. It’s not helpful. Sing if you’re a singer. Sing if you are hoping to be cast in musicals. Do not sing because you’re doing a monologue about a guy who sings all the time. Two minutes of listening to singing done by a guy who can’t sing is not putting me in a callback frame of mind. What’s worse is that the singing in such a case is all too often taking the place of solid acting choices. Do not sing because you can kind of sing and think you might be cast in a “play with music.” Most people can’t sing and that’s FINE. If that’s you, just act. It’s enough, I promise.

4. POOR CHOICE OF MONOLOGUE. Non-linear, experimental, poetic monologues are the very worst choices you can make for audition monologues in a general audition. Almost all of us are casting for linear narrative projects. If there’s no narrative in your monologue, I can’t see how you shape narrative. If there’ s no discrete character, I can’t see how you make character choices. In the end, all I have is you speaking emphatically (again). Monologues that are sexist, racist, or insane are also poor choices. I covered that point in my earlier audition tips post.

5. UNDERREHEARSED. My heart bled for a kid who went up during his Macbeth monologue today. This is not something you want happening to you at TBAs. Only do pieces you know as well as I know the layout of Solitude in Skyrim. Which is to say: PERFECTLY.

6. SONGS WITHOUT RANGE. BLUES SONGS. ROCK SONGS. If you’re singing a song with a four-note range, I have no idea how well you can sing. If you’re taking the trouble to sing at an audition, show me what you can do! Blues songs and rock songs are just beside the point of most musical theatre. While you may be rocking the cast-iron fuck out of that song, we still have no idea how you handle musical theatre songs, which are, let’s face it, the vast majority of musical theatre out there. Even “rock musicals” are (mostly) using musical theatre-style voices, and most musical theatre songs are technically more difficult and demanding, with wider ranges, than most blues and rock songs. They just don’t give me the information I need.

7. WEARING A SHORT SKIRT AND SITTING IN A CHAIR ON A RAISED STAGE. This one needs no explanation. Hello, nurse!

8. TRYING TO CRAM 4+ PIECES INTO YOUR TWO-MINUTE SLOT. This is never a good idea. You’re not showing virtuosity. You’re not giving us enough time to understand why you’ve made the choices you’ve made. It’s unfocused and always ends up being a parade of caricatures. Two pieces are plenty. We don’t need to see everything you’ve ever done.

9. DOING A MONOLOGUE WRITTEN FOR A PERSON OF COLOR WHEN YOU ARE NOT A PERSON OF COLOR. Remember, most of us have no idea who you are and have no way to ascertain if you’re making this choice on purpose (although to what end, I would have to wonder). This will only result in every auditor assuming you haven’t read the play. And if you *are* making this a deliberate choice, bear in mind that this is an incredibly controversial action that would be perceived as naive at best and racist at worst by most of the people in the room capable of giving you a job.

10. YELLING, SHOUTING, OR SCREAMING. Yes, I understand that on occasion volume can be a powerful choice. On the rare occasion. Like, very rare. Easily 99 times out of 100, yelling, shouting, or screaming is the easiest, cheapest, and most boring choice you can make. Pick something more interesting. Any fool can say words loudly. McKayla is not impressed. When you feel the urge to use volume in a monologue, put your thinking cap on and come up with a few different choices to try in that moment. You’ll be glad you did because WE’LL be glad you did.

Auditions are bizarre. WE KNOW THAT. It’s extremely difficult to truly showcase your talent and skill in two minutes. So do yourself a favor and craft that audition to show yourself to your best advantage. We’re all out there rooting for you, honestly.