REVIEW: A Midsummer Night’s Dream at The Seeing Place, NYC 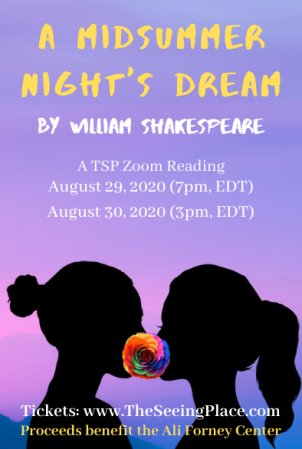 While this pandemic is, as the youngsters say, for the birds (my imaginary youngsters are all living in 1943), one of its silver linings is the accessibility of performances all over the world. As a Californian, I would have had no access to a production in New York. Now it’s as easy as clicking a link.

Artists always find a way. You can’t stop art, and the supposed “death of theatre” has been breathlessly reported many times, with the cause of death listed first as radio, then film, television, and, of course, the internet. Art is life, and life– according to the sage Jeff Goldblum– finds a way.

So I was excited to see what The Seeing Place Theater in New York had done to make Midsummer, often a very physical show, work on the Zoom platform. I know many people decry Zoom-based theater and long for a return to in-person shows. I long for in-person shows as well, but the creativity artists are showing as they play with this new format is, honestly, delightful.

The Seeing Place’s Midsummer is a small-cast show with each actor playing multiple roles. TSP utilizes animation, designed by Erin Cronican and Brandon Walker, as costuming, and while its execution was not always perfect, it was a lot of fun to see. The standout effect was Bottom’s animated ass head, which was a lot of fun. The fairy ensemble– Moth, Mustardseed, Peaseblossom– were animated fairies with the actors’ faces. Major character fairies like Titania & Oberon had animated effects that gave their eyes, hair, and/or faces magical elements. Again, the technology wasn’t perfect, but I would have killed to have the ability to make lightning shoot out of a fairy’s eyes in any of my live productions of Midsummer.

One thing that’s challenging for some actors is code switching from theater acting to camera work, especially the monologue-like format of Zoom theater. Most of the TSP actors had this down, but the star of the show was co-director Erin Cronican, who played both Helena and Peter Quince. Her character creation and immaculate comic timing were a real treat to watch. I was constantly engaged by Cronican’s performance, and found myself laughing out loud alone in my Ready Room at Cronican’s well-crafted and deeply detailed comic moments. Cronican’s Peter Quince monologue at the top of the “Pyramus and Thisbe” play-within-a-play is one of the best renderings I’ve seen in years. Cronican knows exactly what’s funny about every moment of this play, and serves it up to her audience masterfully. Other standouts were William Ketter’s blustery and egotistical Demetrius, Brandon Walker’s fatuous Theseus, and Laura Clare Browne’s joyful Titania. The adorable Ellinor DiLorenzo had some very nice moments as Hermia as well, but there were some moments she seemed to lose focus, which, admittedly, is really easy to do in this new format, where actors are juggling technology in addition to acting directly to a camera. Perhaps the greatest challenge of this kind of acting is to maintain your focus on the camera when your scene partner is (generally speaking) below it. But overall, the cast was solid and enjoyable to watch.

I’d like to tip my hat to stage manager Shannon K. Formas, who made the tech smoother than most Zoom performances. She had a lot on her plate and pulled it off seamlessly.

The LGBTQ+ theme was evident in the Hermia/Lysander love story, as both were cast with women. Some of the minor fairies and Puck were given androgynous looks, and the actor playing Puck, Jon L. Peacock, identifies as nonbinary. Pronouns were included in the program, which should be industry standard. Importantly, this production is a benefit for the Ali Forney Center for homeless LGBTQ youth. 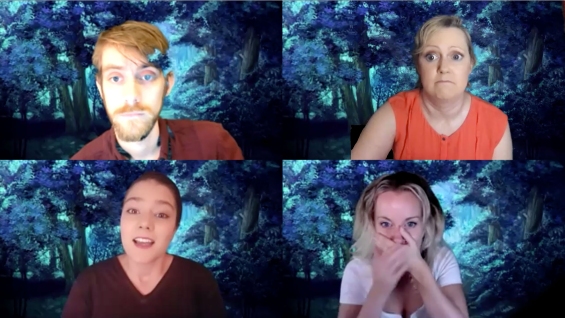 One of the main reasons I was interested in this production is that two of the actors– Cronican and Ketter– are people with disabilities, and PWDs are deeply underrepresented in theater. Both of them have invisible disabilities, often glossed over in discussions of disability outside the PWD community. In a culture in which PWDs are relentlessly bombarded with accusations of “exaggerating” for “attention,” “drugs,”or “special treatment,” and often go through months (or even years) of doctors insisting symptoms are “imaginary” until finally running the right test and landing on the correct diagnosis, those whose disabilities are invisible face a very specific kind of cruel marginalization.

The fact that the disabilities of the actors aren’t visible doesn’t make their identities as PWDs any less real or important. What I appreciated most about Cronican and Ketter in this show is that their disabilities aren’t the focus of the story. When PWDs are represented in the theater, it’s almost always a story about disability in some way, and cast with an able-bodied actor. PWDs haven’t even reached the most basic level of inclusion in theater, let alone equity. Disability is still almost entirely ignored even just in discussions of diversity, equity, and inclusion. Including actors with disabilities in roles that are not defined by disability, in a play that isn’t about disability, is a refreshing change.

Overall, this is a very enjoyable production of Midsummer, and it couldn’t be for a better cause.

A recorded version of The Seeing Place’s Zoom production of A Midsummer Night’s Dream is streaming through September 5th. Click here for tickets. Click here for more information about TSP’s 2020-21 season.

Want me to review your Zoom production? Email bittergertrude@gmail.com.