Anonymous 18th c. painting. Unless otherwise indicated, all art posted here is from the BBC collection, “The Black Figure in 18th c Art,” curated by by David Dabydeen.      (Pictured: A Black man in a red waistcoat and vest with a white high-collared shirt. His hair is in a stylish queue. He looks directly at the viewer with a penetrating gaze, his forehead lit as a symbol of intelligence. He stands before a rich reddish-brown background.)

My fellow white people: The protests you are witnessing now– that you have been witnessing for years– have a long, storied history in American patriotism. What you’re witnessing is a 21st century Boston Tea Party.

It’s important to understand that this cannot be solved with “just obey the police and you’ll be fine.” Again, we have the video evidence to prove that that is not just untrue, but cruelly, horrifically untrue. 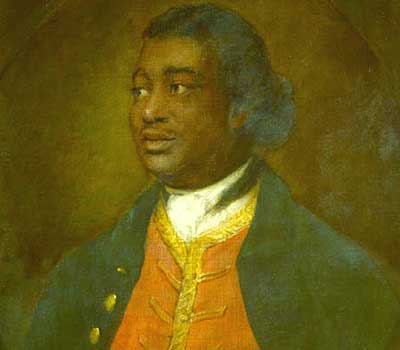 “Portrait of Ignatius Sancho” by Thomas Gainsborough, 1768.     (Pictured: A Black man with lightly powdered hair gazes off to his right, his face illuminated. He wears a green waistcoat with gold buttons, a gold-trimmed orange vest, and a white high-collared shirt. He stands before a brown background.)

Black Americans have been victimized by violent oppression and police brutality for generations. We have the video evidence to prove that we should have believed Black people when they told us about their own experiences. These are undeniable facts.

We have allowed the violence and brutality to happen, even encouraged it, and continue to do so. These are undeniable facts.

“A Black Servant,” Anonymous. 1760-1770. Source: medievalpoc.com     (Pictured: A Black boy holds a full wine glass in his left hand and an empty plate in his right with a red serving cloth draped over his right arm. He’s looking straight out and slightly smiling, as a small back and white dog sits on the table, looking up at him sweetly. The dog’s front paws are on the plate, giving the impression that the dog wants the boy to stop serving at table and play. The boy wears a blue waistcoat with a red collar and a blue vest, both with tan buttons. He wears a high-collared white shirt with a vertical ruffle.)

We aggressively minimize Black oppression by smearing and defaming every victim of a police murder. “He was no angel,” we say, as if a Black person needs to be perfectly angelic to earn the right to live. As if we ourselves live up to that standard. As if perfectly angelic behavior protects unarmed Black people from being murdered by law enforcement. It didn’t protect Aiyana Stanley-Jones. It didn’t protect Botham Jean. It didn’t protect Ahmaud Arbery. We work so hard to smear innocent murder victims we point to the misdeeds of family members and even wholly unrelated people.

Think about this: The violent oppression is real. Nonviolent protests have been ignored, denounced, and mocked. Reports of police brutality have been met with stony silence, victim-blaming, and deflection. When American colonists began violent protests against the British, most of their ire centered around financial aspects of British rule they deemed unfair, like taxes and trade policy. American culture has enshrined “taxation without representation” as the centerpiece of British tyranny, and modern Americans passionately revere the bloody war we fought in protest as the pinnacle of patriotism. Yet white Americans angrily denounce protests over the murder of unarmed American citizens by our own police.

“Not all white people,” right? Most of us seem to fall into two distinct groups:

The white people who valorize a bloody war against “the tyranny of taxation without representation” but denounce and mock all Black protests against police murders, no matter how mild or nonviolent;

The white people who valorize a bloody war against “the tyranny of taxation without representation” but denounce and mock Black protests against police murders that include property damage.

We can do better. We must do better. This revolt is a fight for justice against tyranny.

Is there any more obvious example of “tyranny” than the murder of unarmed citizens by police? “Taxation without representation” pales in comparison.

“Study of a Black Man,” Sir Joshua Reynolds, c.1770     (Pictured: A young Black man gazes off up and to his right, his face illuminated. He looks determined, resolute, and radiant. He wears a white waistcoat and a white high-collared shirt. The background is a cloudy blue sky.)

Black people cannot do this alone. If they could, it would have been over long before we were born. This is a problem made by white people, and we need to solve it. It starts by seeing these protests as a cry for justice. It starts by listening and believing Black witness, Black truth. It starts by examining our complicity, our failures, our willingness to believe the racist lies we were taught. It starts by understanding that there’s no difference– none– between throwing tea into Boston Harbor and throwing a brick through a Target window. The only difference is that these people aren’t fighting unjust taxes. They’re fighting for their lives.