What Does it Mean When Trump Says He’s a “Nationalist”? Ask the Man Who Just Shot Up a Synagogue 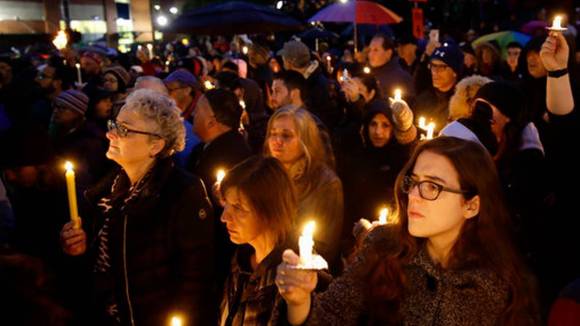 Am I surprised a man opened fire in a synagogue yesterday during a baby naming, murdering 11 people while yelling “All Jews must die”? No. Jews have been a favorite target of violence– political and otherwise– for two thousand years. But open hatred of difference has now gone mainstream, and is present at the highest levels of our society. The extremist right wing, which always feared and hated Jews, people of color, and LGBTQ people, is now dominating conservative media and directing the tenor of the national discourse. Open hatred has become fashionable.

“I’m not politically correct,” goes the refrain, as the speaker defends sexual assault, racial slurs, transphobic violence, on and on. The extremist right has framed this as “truth” vs “the perpetually offended,” as if bigotry represents “truth” and those opposing it are just comically “offended,” like a schoolmarm shocked to find “FVCK” carved on a desk. Opposition to racism, sexism, transphobia, and all abuses of power is strenuously belittled and mocked by the right as “political correctness” and “virtue signaling.” They have made it fashionable to mock opposition to bigotry.

So it comes as no surprise that part of this fashionable bigotry is hatred of “globalists,” a longstanding euphemism for “Jews” repopularized in recent years by the Nazi-sympathizing alt right. “Globalist” is a reference to the very old antisemitic conspiracy theory that Jews have no allegiance to any one nation and seek to dominate the globe as a whole, usually through banking (look for references to the Rothschilds) and skullduggery. Trump himself, just days before the shooting, decried the danger of “globalists” to a Houston crowd that roared its approval. In claiming to be a “Nationalist,” Trump is using alt right terminology that means he opposes “Globalist” Jews.

The extremist right believe “Jews,” as a nebulous, evil consortium (often said to be headed by philanthropist and frequent Democrat donor George Soros), are somehow “selling out” the US to other nations for personal gain– including the destruction of the “white race”– and global political power. “Nationalist” means “white Nationalist”– someone fighting for the preservation of a white-dominated, Christian America against Jewish Globalists. One of the things white Nationalists believe Jewish Globalists are plotting is the “destruction of white America” through the left’s “support of open borders,” which fosters “white genocide” by creating an “invasion” of Brown people. These Brown people are all “criminals,” “rapists,” and “terrorists,” an “infestation.” When the right claim that “the left” is funding “the caravan,” they mean that Jewish Globalists are funding it as part of their plan to destroy white domination in the US. This is why it makes no difference to these people whether immigrants are asylum seekers fleeing horrors or people seeking the American Dream. The operative for Nationalists is whether immigrants are– or are not— white.

Black people– the lowest of the low to Nationalists– are portrayed as witless fools, “duped” into voting Democrat with offers of “free stuff.” “Welfare” encourages them to “outbreed white people.” This is what the “welfare queen” slur has evolved into– a subhuman tool of Jewish Globalists encouraged to breed with free food, free phones, and subsidized rent as Jews cackle over the impending destruction of the white race. One wonders what Nationalists make of the thousands of Black Jews in America or of African Jews.

Do I think Trump knows any of this? No. Would he care if he knew? Also no. Do the roaring crowds who approve this rhetoric know? Many of them, sure. And some are just along for the ride because they love the bullying, the anger, the hate. They love that the bigotry and hatred they call “patriotism” is now at the highest echelon of government. It’s why they elected him and why they remain faithful as the rest of the nation– and the world– looks on in horror. 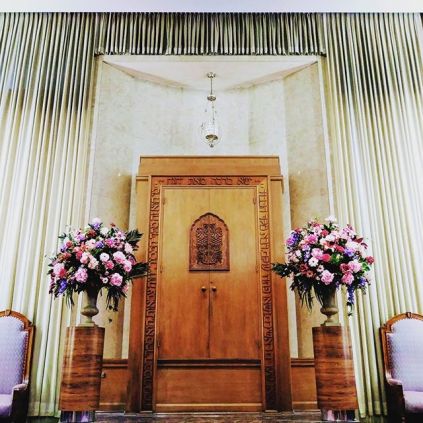 The chapel in the Tree of Life synagogue. (Source: tolols.org)

The mainstream right refuses to address– or even acknowledge– the popularity of white Nationalism in its ranks even as their leaders defend its principles and actors. This is a battle for the soul of the Republican Party, and an utter lack of any serious effort apart from some weak statements decrying “racism” (even as they campaign for the racists) is their admission of defeat. They’re all rushing to prove to conservative voters how loyal they are to Trump even as he screeches racist conspiracy theory rhetoric at rallies. Against that behavior, who believes mealy-mouthed tweets about being “against racism”?

Compounding this moral cowardice, the right consistently refuses to accept that anyone on the right can do any wrong. They have already begun pretending this synagogue shooting is a “false flag,” just as they are pretending the recent mail bombs are “false flags,” just as they have pretended that every murder and attack by far right extremists in recent years are all somehow orchestrated by the left. They claim the left has somehow planted every shooters’ right wing social media posts, evidence of membership in right wing groups, photos of the shooter clutching Confederate flags, giving Nazi salutes, and wearing MAGA hats– even claims of planting Nazi and pro-Trump tattoos.

The right will pretend there’s “violence on both sides” and point to an antifa kid setting fire to a trash can.

I tell you what, Tucker. I’ll GIVE you my trashcans if you BRING BACK THESE LIVES.

The false equivalency of “both sides” is dangerous, because it equates violent racist rhetoric with the rhetoric opposing it.

I agree, wholeheartedly, that there should be no rhetoric advocating violence, period. But it is dangerous– and I mean that literally, as in more people will die— to pretend that approving of a politician’s physical assault against a journalist, or popularizing lies like “Democrats are a violent mob” and “[If Democrats win, they] will overturn everything that we’ve done and they will do it quickly and violently. And violently. There is violence” are in any way equivalent to accosting right wing politicians in restaurants with protests against their actual policies, or statements calling attention to the very real rise of white Nationalism in conservative politics. Republicans are even equating putting googly eyes on a campaign billboard with Nationalist murders.

White Nationalism and the racism, antisemitism, and anti-LGBTQ sentiment underpinning it are not new to America, not by a longshot. But it’s undeniable that over the past 50 years, the US has made some small gains in the fight against it, and it has come roaring back, rearing its ugly, violent head and insisting on its dominance. This is the “movement” that caused 74% of white voters to vote for Trump as opposed to just 6% of Black voters, 26% of Jewish voters, and 28% of Latinx voters. That divide is no accident. It wasn’t “jobs” or “the economy” unless you mean the relentless drumbeat of “your taxes pay for Democrat handouts to Black people and immigrants” or “immigrants come here to take our jobs.” Much of the rhetoric on the right was racially charged in 2016, and it has only escalated from there, emboldened by what they see as a white mandate. Nine GOP midterm candidates have open ties to Nationalist or Nazi groups as the bulk of the party continues pandering to Nationalists either with dog whistle racism or open allegiance.

When we say “we must come together as a nation,” unless we’re coming together against Nationalism, all we’re doing is enabling it. At the barest minimum, we must all immediately and vociferously stand against the racist, antisemitic, anti-LGBTQ rhetorical violence spinning out of control in our political discourse. Better yet, we should stand firm against the dangerous policies such rhetoric is designed to enable.