BUT I GET TO BE RACIST BECAUSE ART: The Mikado 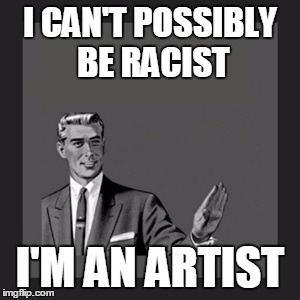 With last year’s massive national controversy about The Mikado in Seattle, it’s difficult to believe that anyone, anywhere, would be doing The Mikado in yellowface, right? I mean, Rick Shiomi at Skylark Opera in collaboration with Mu Performing Arts in Minneapolis showed us all how it’s done back in 2013: Since the work is actually meant to lampoon British Victorians, why not actually dress them as British Victorians? A few very small, non-invasive line changes and voila. Now you get to have Mikado sans racism. That’s what we all want, right?

As it turns out, no. The New York Gilbert and Sullivan Players is doing a production of The Mikado this upcoming holiday season, with most of the characters in yellowface. Playwright Leah Nanako Winkler wrote a fantastic piece about it on her blog that was picked up by Angry Asian Man, in which she expresses her shock and calls for people to speak out in solidarity with the Asian American theatremakers (and audience members) who are fighting for better representation of Asian people on American stages. If you want to contact the Skirball, she lists all the contact information you need.

Several of the usual (awesome) suspects in the theatre blogging community are writing about this production as well (Howard Sherman, Erin Quill). With all these articles burning up my feed, I’m seeing the inevitable backlash comments as well, defending The Mikado in particular and racism in art in general. I’ve covered this issue before. We’ve all covered it before. And yet the apologia for racist content never stops.

So, I’m thinking it’s time to play Racist Art Apologia Bingo! EVERYONE PULL UP YOUR FACEBOOK FEED. Find the first article about this set to “public” and open the comments. Get ready to check those comments for these well-known racist apologia statements as Millie calls them! Ready? GO.

(Tumbles wheel full of racist apologist statements) OK, I’ll just reach in here and pull these out one by one. See if you can find them in your feed!

B17: “The one who points out racism is the REAL racist.” Quote from my feed:  “[The Mikado] is only racist in the eyes of a racist.”

Analysis: ILLOGICAL. I get that you’re going for the time-honored “I’m not the nerd; YOU’RE the nerd” you picked up in grade school, but it doesn’t fly in grown-up discussions. Let’s think about this for a second. The primary voices speaking out against yellowface are Asian American. So Asian Americans who say The Mikado is racist are the real racists? Because . . . ?

Here comes the next one!

N44: “Why should we pander to political correctness/SJWs/liberal demands?” Quote from my feed: “A work of art shouldn’t pander down to ignorance but insist that an audience rise to its challenge.”

Analysis: BELITTLING. Treating people of color with respect is never “pandering.” You only “pander” to demands when those demands are unworthy of consideration. Making this argument is tantamount to saying that racist portrayals of people of color on our stages, including yellowface, are so perfectly acceptable that the protest against them is worthless, and any consideration of that worthless protest is pandering. This quote is even worse, as it assumes that people who protest the racism in The Mikado are just “ignorant” and unable to “rise to the challenge” of art. 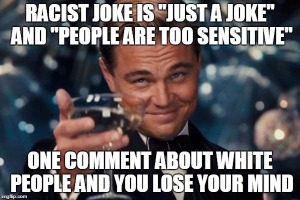 Did you get both? Get ready for the next one:

I29: “It’s actually anti-racist if you think about it.” Quote from my feed: “What always matters in the question of whether something is racist is intent. It is actually making fun of an Englishman’s condescending attitude towards other cultures…or specifically, the Japanese.”

Analysis: WISHFUL THINKING. So let me get this straight: The cartoonishly stereotypical characters in The Mikado are actually fighting racism because they’re mocking Victorian racism through modern white people performing cartoonishly racist Asian characters. This is like claiming you punched someone to show other people that punching is bad. MY INTENT WAS CLEAR. I am anti-punching. Therefore, I get to punch whoever I want. QED.

Ooh, I bet you guys are getting close! Just a couple more spaces to fill……

042: “You just don’t understand.” Quote from my feed: “[The claim that The Mikado in yellowface is racist] is an astonishingly simple and one-dimensional understanding of this lighthearted but really profound and many layered work of comic art.”

Analysis: NONSENSE. We understand; we just disagree. We see all the layers that you do, sweetheart, we just don’t agree that the “profound” message that Victorians were racist and Orientalist (lol, “profound”) does not earn the right to perform yellowface in 2015.

G8: “This is ART.” Quote from my feed: “There’s a very good reason these works have endured…why they are admired.”

Analysis: IRRELEVANT. This is an apologia favorite. “Art needs to be protected; art should be pushing boundaries and making people uncomfortable; pieces like The Mikado have have endured and long been admired; we should never censor art.” No one is claiming these works should be demolished. We should continue to study them. Pretending our history of racism never existed is a dangerous idea. But what we’re choosing to perform as “light-hearted” comic performances, what we choose to put on our stages, and how we choose to present work, are all completely different considerations. The work didn’t endure because of the racism in it, and often, as Rick Shiomi demonstrated, there’s a wonderful workaround that makes the piece relevant to an audience for whom racism is no longer acceptable.

The main problem with the “preserving ART” argument is that racism and racist caricatures had one cultural context in the Victorian (or Elizabethan, or Classical, or what you will) era, and have completely different contexts now. Fighting to preserve a racist work as written most often vandalizes that work’s original intent. The racist symbol was created to convey a meaning it can no longer convey. Yellowface can no longer convey the meaning Gilbert originally intended when writing The Mikado because that meaning has been superceded by a modern understanding of yellowface’s inherent racism. Even if you believe the yellowface in The Mikado means “Victorians are racist; isn’t that funny?” it can never mean that to an audience in 2015 because yellowface is read as racist in and of itself, and stomping your feet and insisting that Gilbert’s intent was completely different does exactly nothing to change that.

But purism is a smokescreen to hide the real issue at hand. If people are fighting so hard to perform classic works as originally performed, where are the castrati? The boy actresses? The act intervals? The on-stage audience seating? These people have no interest in purism as such. They’re upset because they feel entitled to the right to be able to decide what is acceptable and what is not. White people have always had that right, and the idea that people of color might have the cultural power to contradict them and be heard galls them. An issue these white people find acceptable– racism in performance– is being challenged, and they will fight as hard as they can to retain the cultural supremacy that entitles them to continue to define racist performance as “acceptable.” They’re fighting more and more furiously because they know they are losing.

I, however have WON!

Suck it, Marlene, Esther, and Florence! See you at the next Hadassah meeting in my NEW HAT.

P.S. Shana Tova to my fellow tribespeople and Jew-ish affiliates! I hope you all have a wonderful 5776.

UPDATE 9/18/15: NYGASP has announced the production will be cancelled and replaced with Pirates of Penzance. I still think a better solution would have been to update the work like Rick Shiomi did, but I understand why they felt they should just shut the whole thing down. I hope this opens a conversation at NYGASP (and elsewhere) about representation and diversity on our stages.

6 thoughts on “BUT I GET TO BE RACIST BECAUSE ART: The Mikado”