How To Rock Your Musical Theatre Audition

I understand that there are something like 47,000 books on this topic, but I’m going to give you some succinct, usable advice right now for free.

In addition to running Impact Theatre, I’m also the casting director at a TYA company, Bay Area Children’s Theatre, which is a blast. For one, it’s incredibly relaxing to be in a space where the final decision isn’t mine (Me: “Wow, what a tough choice– all three of those actors are great. Welp, I’m headed home– lemme know what you want to do!”) Secondly, it’s been fun to learn more about TYA and casting musicals, two things I knew very little about before I started. A long time ago, in a galaxy far, far away, I was an opera singer, so I have a solid working knowledge of singing and singers. By the time I got to BACT, I had been casting shows for over 20 years, so I had a solid working knowledge of what makes a good audition and what should be avoided. I was bringing years of experience to the table, which helped me learn very quickly what makes an excellent musical theatre audition and what amounts to self-sabotage.

The original 1966 Broadway production of Cabaret

An audition is a fact-finding mission. We’re looking for answers to specific questions, and everything else is pretty much irrelevant. I’m not going to get into general audition tips– I’ve already written about that quite a bit (here, here, here). I want to speak specifically about your song.

1. I’m surprised how many people choose songs that tell us pretty much nothing about their voices. So many songs from the past 10 or so years of musical theatre writing are very poor choices for audition pieces– they’re conversational, almost recitative-like in places (if you know opera) and it’s impossible to tell what your voice can really do. You want a song that shows off your vocal quality and capabilities. It doesn’t impress us if the song is from a new musical or if it’s a song we’ve never heard before. That kind of thing is more relevant with monologues. We’re looking for answers to specific questions, like– What is her vocal type? Does she have a belt or is she more of a “legit” singer? What’s her legato like? How accurate is her pitch? What kind of volume can she attain, and is she showing the kind of throat tension that will cause her to lose her voice by the end of opening weekend? There are so many more, some dictated by the type of musical we’re casting (more on that below). If you’re interested in new musicals, there are so many great choices out there. Choose a song that shows off your vocal chops. Choose a song you love to sing because it’s right in your sweet spot. Don’t choose a song that’s cool, and has a lot of depth, but has a five-note vocal range. It just doesn’t tell us what we need to know. We’re not looking for someone to choose material– we’re looking for someone who can perform it.

Zero Mostel in the original 1964 Broadway production of Fiddler on the Roof, © Photofest, Inc., courtesy of Great Performances, Broadway Musicals: A Jewish Legacy

2. Don’t choose a song that’s overly ambitious. Every role has its own, specific needs. Some roles require a great deal of virtuosity, some require the ability to navigate tight harmonies without pushing your way to the front of the group, and some can be Rex Harrisoned through. Take realistic stock of your abilities and show us what they are. No matter where you are, there’s a role for you somewhere in the world of musical theatre. If you assume you need to reach for something you can’t actually do, all we know is that you can’t do something– we never got to see what you CAN do.

3. You are not Kristin Chenoweth. Unless you’re Kristin Chenoweth, who I assume, doesn’t read Bitter Gertrude. ANYWAY. Are you singing with your natural voice? Or are you pushing it out your nose to try to get that signature Kristin Chenoweth nasally sound? She has a very distinctive, fun quality to her voice, and that’s just how her voice sounds. You honestly don’t need to imitate her to get roles. Be yourself. When you push your voice out your nose, we can hear it, and we wonder what your voice really sounds like. BECAUSE WE DON’T KNOW. Let Kristin do Kristin. You do you. Nothing against KC, but I’ll be happy when women stop imitating her.

Kristin Chenoweth as Glinda in Wicked. Photo by Joan Marcus.

4. We tell you it’s OK when you don’t bring sheet music, but it’s actually not. I mean, it kind of is? We still want to see you. But a large part of performing a musical is being able to match pitch with the accompaniment. Can you hear the piano (or the guitar, or the orchestra) as you’re singing and match pitch? When you sing a capella, we’re left with partial information. This is why we’ll often asking you to sing scales, or Happy Birthday, or something along those lines with the piano if you come in with an a capella audition. Better to sing the song you’ve practiced than suddenly be asked to bust out the Star Spangled Banner on the spot, no? Bring your music.

5. Choose a song that’s contextually appropriate. If you’re not familiar with the musical, or if it’s a new musical in development, find out what kind of singing the role requires. There’s a world of difference between Dreamgirls, Into the Woods, American Idiot, and The Sound of Music. Bringing a song that’s appropriate for one won’t necessarily give us the knowledge we need if we’re casting one of the others. If we ask for an “uptempo musical theatre song,” don’t bring in a rock song, a ballad, or a nine-minute Sondheim extravaganza. (In fact, avoid Sondheim completely, which of course is the advice you get everywhere, and you’re not going to find any disagreement here.) If you need clarification about the music in the show, or what’s expected at the audition, ask!

6. Act your song. I’m sure you’ve heard this one million times, and here it is again. Your song is like a monologue. It has a narrative– a beginning, a middle, and an end. When something’s repeated (such as the chorus) find a reason why your character is repeating herself. “She’s happy” or “she loves him” or “she likes to sing” are pretty much the least interesting choices you can make. You can be happy, in love, or possess a predilection for something in silence, in words, or through (God help us) interpretive dance. There’s a reason your character is singing, and it’s not because “this is how it’s written.” Make clear, bold acting choices about your intro, every line you sing, the bridges, and the outro. Think, plan, rehearse.

7. REHEARSE. Prep a variety of songs you can use for the various types of musicals in which you’re interested. Then you’ll have a few songs from which you can choose, always ready to go, for most auditions. When you come in under-rehearsed, we can tell, and we wonder if you will be similarly unprepared in rehearsals. I’d honestly rather see an inappropriate song than an under-rehearsed one.

Nia Holloway as Nala and Jelani Remy as Simba in the Lion King national tour. Photo by Joan Marcus.

8. Do it, enjoy it, and forget it. It’s just an audition. You will do eleventy billion of them. Coming in tense will jack your voice. I’ve seen plenty of people miss a high note or squeak instead of belt due to nerves. Try not to stress. Do whatever you need to do to come in relaxed– within reason. I know sometimes people will tell you to have a glass of wine before you go in, but the last thing you want is the casting assistant scooting in a few steps ahead of you to inform us that you smell like you’ve been drinking. Never lose sight of the fact that an audition is a job interview. But also never lose sight of the fact that, like a job interview, we’re auditioning for you as much as you’re auditioning for us. You want to work for a company that respects you, and for which you enjoy working. I think sometimes that focus can help with nerves. When it’s done, walk away. Try not to obsess about it. There are so many reasons people don’t get cast, and talent is only one of many. If you don’t get cast, don’t take it as a sign of your worth as a performer, because it’s not, at all.

I hope this was helpful! Now go rock it out. 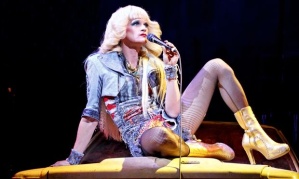 Neil Patrick Harris in Hedwig and the Angry Inch. Photo by Joan Marcus.

3 thoughts on “How To Rock Your Musical Theatre Audition”